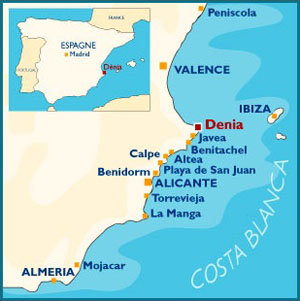 Denia is well known for being the gateway to the Balearics via Cabo La Nao which is the closest point to Ibiza. The Island can be clearly seen from our office on a clear day being only 54 miles from here.
The area boasts its own micro climate and is listed as having the best climate in Europe.

The Staff in El Portet Marina are a nice friendly bunch with the lovely Vanessa and Victoria on the front desk, only enhancing the Marinas appeal!

Facilities are modern clean and tidy with lift out and maintenance facilities for the very largest of catamarans an super yachts in the nearby Varadero. Our local resident service team Engineers David De Harro, John Bowker at Embarco, last but far from least Boudewijn Stastra  "Boudy" for short.
These Guys can cope with anything that you can throw at them, from total engine rebuilds to GRP repairs and all marine Electronics.

Ancastlage Diffusion the local Chandlers stock just about anything you may require locally and if they have not got it, they seem able to get it very quickly

Shops and restaurants and bars are an easy 10 minute walk from the marina and it is a vibrant place to be most of the year with exciting night life and a place to view the many fiestas throughout the year.

With views of the Medieval Castle and the famous "Montgo" monolith looming in the background. Cyclists come from all over the world to train on the Montgo's slopes and is also a destination for walkers scaling the challenging paths on the mountain.
From the top you can see both Valencia and Alicante on a clear day with amazing views in every direction.
There are some fantastic beaches around Denia and the stretch of coastline between Altea and Denia is one of the most interesting on the Spanish Mediterranean coastline. Plenty of nice anchorage spots ideal for snorkeling, and BBQ's The towns of Moraira, Granadella, Javea, Calpe and Altea are all within a short distance.
The famous Lemon Train departs from Denia railway station a short walk from the marina, which  carves its way through the mountains and takes you on a picturesque route up the coast towards the lively resort of Benidorm passing through and stopping at several pretty coastal towns and villages on route.

The Ibiza, Mallorca Ferry also departs from Denia within a short walk from the marina.

Denia is also placed equidistantly between both Valencia and Alicante international airports so an idea place to place your boat, for sale with us.

For long term berthing El Portet with give you a favourable discount if you pay in advance and mention you are a member of Worldwide Catamaran Club. 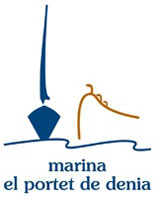